The archived Session 4 board includes the announcement and all entries, minus attachments.

As the winner of the third session, maw chose the theme for the fourth session.

Theme : Use your foes. Have your player ship interact with the enemy in a unique manner (other than shooting them). This does not need to be a substitute for shooting (we've had that theme already) but should be critical to game play. It could be some form of enemy manipulation, or some form of enemy assimilation (in whole or in part).

We had great participation and a great set of entries for Session 3. Let's keep the momentum going!

Maw won the session with AGGREGAT, a chain-reaction puzzle/shooter game written in BlitzMax.

My entry into the session was Assault Wing, which featured attachable wing parts with a new, more-detailed visual style.

Collect wing parts from enemies to power up your ship.

The game requires the Visual C++ 2008 Redistributable Package, but is otherwise completely self-contained. Just unpack the archive into a folder of your choice and run Session4.exe. 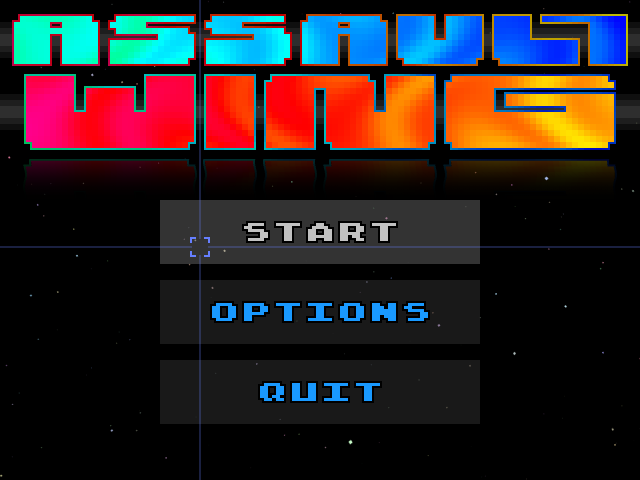 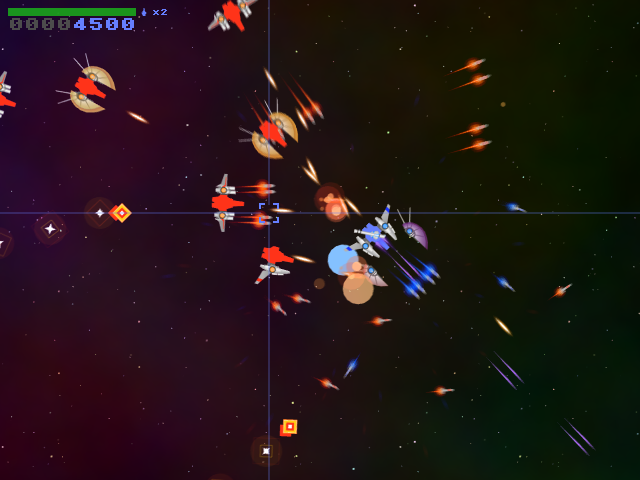 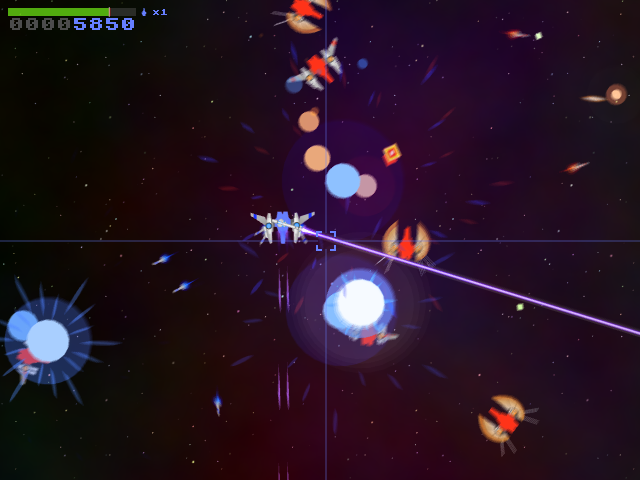 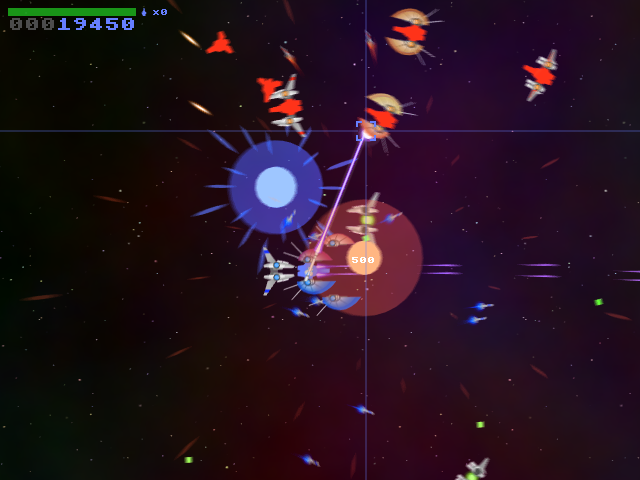 I'm torn between doing one of several straightforward ideas that would fit within the same "universe" as my prior entries or more unusual ideas that would require very different settings and styles. The former is easier, but the latter would be more interesting for everyone else unless they happened to like my early-1980s style. :D

I like your style quite a lot, but there's nothing wrong with mixing things up a bit. I do that myself, despite the Pixel Spaceships look that helps a lot with rapid prototyping.

I just want to be on the correct side of the fine line between "it's my style" and "just being lazy" :D

I still haven't gotten a solid idea to implement yet, and haven't had time to do much experimentation this week.

Try thinking in the shower. Some of the best game ideas usualy strike me when taking care of my personal hygine. :D

It didn't help that what few ideas I did have ended up overlapping other entries. :D

I actually forgot some ideas because of this... :O

Well, here's what I'm going with so far.

Enemy units use a modular design consisting of a core ship and a pair of wing modules that provide armament and protection. Mixing and matching cores and wings provides a wide variety of capabilities.

The player ship features a powerful but slow-firing turret-mounted laser cannon capable of "sniping" enemy core ships without damaging their wing modules, along with a pair of coaxial machine guns. After destroying a core, the player ship can attach the intact wing modules to augment its capabilities. 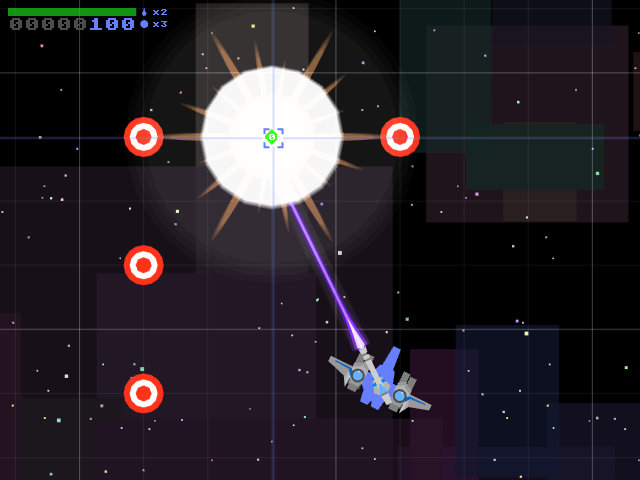 The "Wings"-idea is really cool. But does it mean the player can collect only 2 wings?

For now, yes. I'm leaning towards having the previous wing modules detach to form options in formation with the player ship, with excess modules beyond a set limit dropping off to form a module pick-up for later retrieval.

I now have an enemy with attached wing modules that drops a module pickup when destroyed. It doesn't quite work the way I want yet, but it's definite progress. 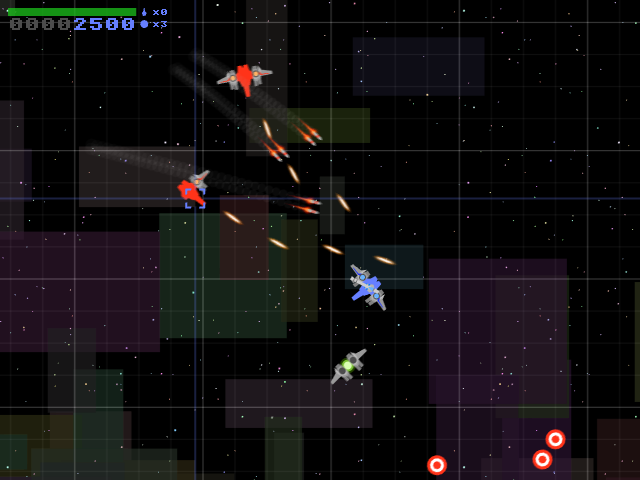 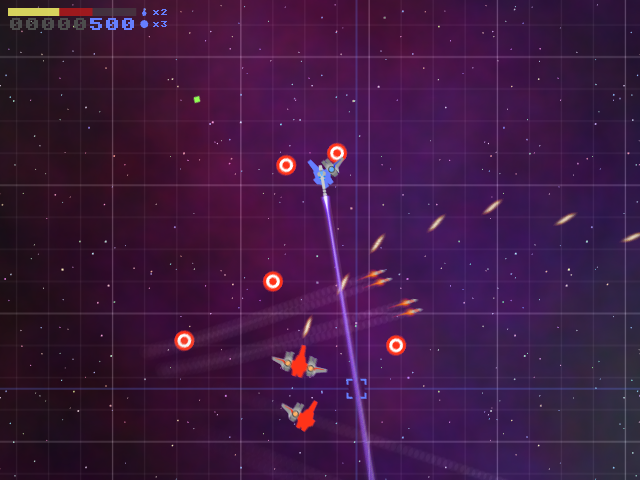 Hey, thats looking good. I guess you stick to the WASD/Mouse control scheme?

It's still using the same arena-shooter controls as before, with a few tweaks. The main body (and wings) point in the movement direction, while the turret points in the aim direction.

The big problem right now is that enemy units are much better at using the wing modules than the player, so the player ends up using the laser cannon all the time.

To allay fears of having only one pair of wings at a time: Formation Attack! 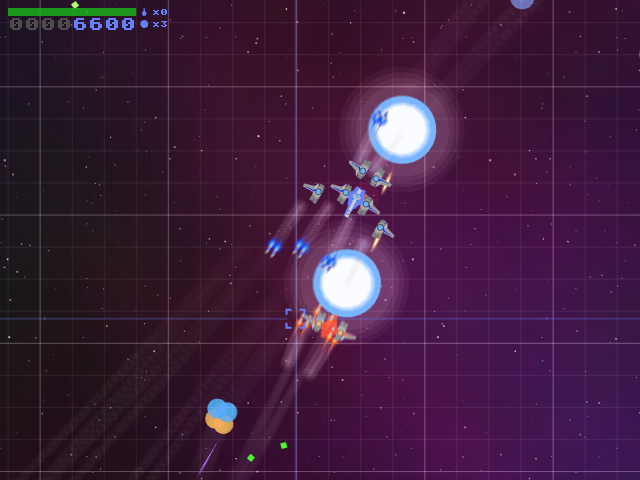 The deactivate-modify-upgrade process on collecting a wing module currently triggers a bug where the player ship and wings "forget" any damage taken, but it works in the player's favor so I'm not too worried.

Now I need to add some more wing types.

I added that multi-layered Perlin noise nebula background a few days ago when I should have been working on gameplay. :D

I added a new wing module based on my concept sketches, this one launching homing missiles instead of dumb-fire rockets. Even with only two types of wing module, you can already mix and match them:

I also got rid of the grid, adjusted the nebula background a bit, and removed the missile trails. I need to find some way to draw missile trails that doesn't involve spawners generating hundreds of discrete renderable entities.

At the rate things are going, I won't have time to add many more wing modules. I currently generate model geometry by hand in an XML document, which takes a long time. :P

Looks very beautiful! Do you use OpenGl to help render the graphic? Or is it just Sdl blit function? I'm just wondering how fast SDL is :S

It's straight OpenGL. I use SDL to create the window and OpenGL context, collect input, and play sound. I haven't tried SDL's rendering features so I don't know how fast they are (or not). I've gotten the impression that they're pretty good, though.

That looks really good. I can't wait to play it! But I would like to encourage you to add one more wing/shot-type. "Three is a magic number..."

The main thing is getting something resembling a game out of what I have by tomorrow. I tried putting in the Stargate enemies as "fodder", but they're actually really nasty against the player ship with no wings. Who would have thought? :D

I completed a third wing type this afternoon: a "shield" wing that provides extremely strong defense but zero offense. It's an interesting contrast to the hard-hitting "rocket" wing and the homing-shot "missile" wing, at least. Unfortunately, it doesn't work as well in the outrider or trailing positions. 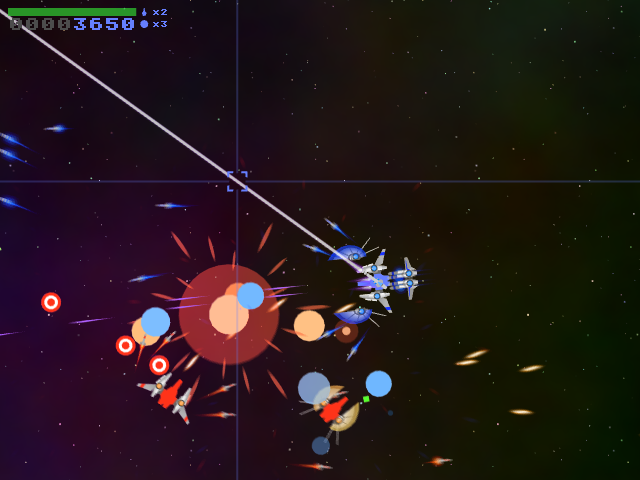 I have a wide variety of wings I would like to add, but each one takes several hours to build from concept art. It'd go faster if I had some sort of vector art tool that could output geometry in text form so I didn't have to plot things by hand.

The three wing modules do feature shading now, which makes them look a lot nicer than before. If I'm only going to have three of them, I might as well make them look really nice. ;)

OK, I think I'm going to call it done for now.

I apologize in advance for the obnoxious difficulty level and blatantly recycled level content. :D

For some reason, I start Session4.exe, the screen changes resolution.... Then it changes back and Windows goes back to what it was doing before. I have the package, I actually just installed it before running the game... Any idea why it's not working?

Looks very cool indeed will be trying this one out later :D

While my main project will maintain its deliberately early-1980s look, I'll definitely be keeping this style in mind for the future. I would need a vector art package for it to be even remotely sustainable, though. Creating a single wing from a scanned illustration took several hours.

Also, I'm not as convinced that it plays as good as it looks. It would have been in much better shape if I had been able to get more done the first week, but I didn't have much time and didn't have any ideas until the first Friday. :P

I think this entry has a lot of potential, both gameplay and graphic wise. However, the level design doesn't do the game justice. There are so many things going on that I didn't know what to do but keep on collecting wings and hold both left and right mouse button lol. Still, I manage to survive and it doesn't seems like I was going to die anytime soon either!

Also, all the wings look the same when they're waiting for you to pick up, so I don't know how can I choose which wings should I use :S

In conclusion, I can see this game developed further with more wing types and with less number of enemies so that it doesn't seems like a luck-based war. It's too bad that you don't have more time to work on this because with a better level design, I'm sure this will be a great game. But it's understandable, giving two weeks development time :S

Maybe we should take a break so that some of us can develop the ideas spawn from these sessions further and made it into a full game :D

You're right that the game degenerates into a free-for-all fairly quickly. The main problem was that I barely got the three wing modules in by Sunday night, and spent the last few hours wrapping the game up into a releasable build. I ended up copying the spawn cycle from Rocket Bomb with the wing-equipped ships in place of the enemy bombs.

The rocket and missile wings originally had regenerating ammunition to discourage "spamming", but I cut that that when I didn't like how it played and didn't have time to add an ammo display for them.

I'm definitely fond of the wing modules, though I think they'd be better served by the original game they were designed for.

On the plus side, my experience typing all that geometry into XML finally pushed me to look into a vector art package. A friend suggested Inkscape, and I'm already pleased with how that's going. I'll still have to process the output, but I won't have to do the interminable tweaking of vertex positions.

I have a quick tweak for the player ship to fix the sluggish handling. I had two ideas going on at once, the first being a "tank-like" ship with a turret-mounted cannon and the other being the attached wings. The problem was that they interfered with each other and made the game much less enjoyable than it could have been.

Open templates/player-assaultwing.xml, go to the first <ship> tag (the one sandwiched between <team name="blue"/> and <soundcue>) and replace it with this:

The ship's handling will be a lot snappier after that.

"Rocket Bomb" only got fun after a week of tweaking and polishing the level content, but "Assault Wing" never got that level of attention because I got started late and barely got the core mechanic sorted out before the deadline. That's not an excuse, just a statement of fact. :D

This is a great little game! I really enjoy the background. If feels fairly polished too for such a short development timespan. Great Job!

To be fair, I didn't exactly start from scratch. :D

The application framework makes adding new things fairly easy, so I spent most of the time adding the gameplay features required for the theme, along with a few bonus things like the Perlin noise texture.

It needs about a solid week of design attention to actually be worth playing in my opinion, but glad you like it. :)